The season of extravagant miracles does not disappoint.

Our missing bantam returns from her hiding place trailing twelve balls of yellow fluff behind her. At the current count, we have nineteen chicks, fluttering and yelling and forever being rounded up by their fierce, patient parents.

The lupins begin to bloom, tall yellow spears, conspicuous even among the multitude of blooms.

The cucumber scent of the white broom on the breeze. The hillside opposite explodes into bloom; it looks as though a God has left a thumbprint of pollen on the slope, where the gorse blazes yellow.

Last week I wrote about hope and it’s true; it’s impossible not to succumb to it, at this time in the year when the flowers are out and new life is hatching and everything is pouring its energy into life. You can almost feel it, the vigour with which leaves unfurl and roots stretch down. The cherry blossom fluffy and white. Roadside railings heavy with wisteria. Flashy camellias and their improbable 1950s pink. The daisies, the flowering quince.

How could we not feel joy?

How could I imagine feeling anything other than chest-bursting gratitude, than heart-cracking thanks?

The illusion of calm

And yet, this moment is not the whole truth. Could never be.

It’s happening already, the cracking of the veneer. The melting ice, the disrupted climate patterns, the dying reefs – already, we have begun to topple the dominoes, and have no control over where they lie.

It is stomach-lurchingly horrible to think we might be on the brink of the systems which sustain us crumbling, in a very real and very alarming way.

Greta Thunberg told us “I want you to panic”.

And yet, like the experiment where smoke is pumped into a room and the experimental subject waits, because no one else is doing anything (they’re actors, but the subject doesn’t know that) we look around us.

No-one else seems to be doing anything. They’re still going to work, paying their mortgages, answering their emails.

And so we continue as normal, trying to ignore the lurking doubt. What if the doom-sayers are right? What if this is all about to tear down the middle? What then?

What if the crisis has already happened?

If you, like me, read the growing data on the climate crisis with a rising sense of emergency, these words might give you space to pause.

“There is fire on the mountain. Run. Run. Run. The recent warnings of climate scientists published by the IPCC – that we have about eleven years (till 2030) to put our houses in order or risk environmental degradation, suffering and annihilation on a scale not seen before – are neither new nor universally urgent.

Non-white bodies have been here before. Many times. We faced catastrophic ends when Shell soaked our rivers and fish with oil in the Niger Delta. We tasted the saltiness of our tears when our bodies were thrown in the waters of Transatlantic commerce. We were pushed to the brink when pipelines threatened to snake through our lands and our myths at Standing Rock. While we tended to our children, we were obliterated and poisoned by the radioactive blasts of a war won – the toxic echoes of supremacy still ringing in the bodies of our children yet to come. We were killed in 1622, 1978, and 1945.

The only reason why everyone seems to be running helter skelter is that the spectre of a ruinous 2030 was generated by a privileged economy of knowledge production. But we had our 2030 hundreds of years ago. 11 years to come has already happened. This is why climate justice cannot merely be about scrambling for ways to approach 2030. It must be about meeting all the years, all the times, all the periods and invisibilized worlds it contains. Climate justice has to be about withnessing the ghosts that haunt 2030 as much as it is about addressing 2030.”

For millions of people in the world, the “climate crisis” isn’t an abstract, or even an inevitable future event. It’s one that is happening right now.

What insulates us from that reality is the fact that our lives have been designed purposefully to shield us from the vast majority of the pain and suffering that is required to allow us to live as we do.

We don’t see the exhausted seamstress, far from home, in the fluorescent-lit factory – just the perfect dress for the wedding this summer.

We don’t see the factory-farmed pig, in its choking prison – just the crisp bacon, hot from the pan.

We don’t see the storm-ravaged village, the drowned farms – just life, as normal, the electricity and petrol and water we need, always there.

One could say that the people claiming that there is “hope” are doing nothing more than fooling themselves.

One could point to evidence that a climate crisis, a climate catastrophe of global proportions, is already happening, and there is nothing we can do to stop it in its tracks.

That the continuation of “life as we know it” is a bubble waiting to be burst.

That it is irresponsible to point to efforts to reduce our collective footprints, because there is no hope of changing things now, and to attempt to think otherwise is reckless.

For me, the question of whether or not there is any scope for the planet to recover so as to allow human life to continue, or whether my individual action can dent the course we are taking, is not so important.

If the crisis is already happening, then what matters is how I respond to this knowledge in the here and now.

But when I think about how I can try and alleviate the suffering I am causing in the present, the right actions look strikingly similar to the ones which might yet make a differenceto the future.

This is the best part. Beginning to live by these principles, even just a little, even in tiny incremental steps, has been the most rewarding and pleasurable process I have ever undertaken.

Lifting the weight of “pretending everything is fine” and beginning to see my life as an ongoing process of reducing the harm I am causing and taking responsibility for my actions has left me lighter, clearer, and more courageous.

I feel that with every change I make, with every thread I sever from the faceless, global corporate machine, I am reclaiming a part of me that had been lost for such a long time I’d almost forgotten it was there. Creative. Steady. Honest. Kind.

And I stop fearing the outcome, because I recognise that it is not yet written. As I change my life to reflect what feels most aligned with my truth, I am writing the story the way I want it to be. 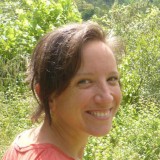